The National Media Commission has issued a warning letter to Onua FM, warning the media house to call their employee, Captain Smart to order after the Presenter called for an uprising on Live Radio.

In a letter addressed to the Chief Executive Officer of Onua FM, the NMC raised concern about a recent broadcast in which Captain Smart called for an insurrection against the State of Ghana and its institutions.

According to the NMC, this particular broadcast crosses the line of robust and critical broadcasting and transforms Onua FM into a “megaphone of war”.

The NMC indicated that even though the said broadcast alone constitutes grounds for regulatory action, they believe that given the chance, management of the station will take the opportunity to bring their content to a level of professional acceptability.

The NMC further reminded Onua FM that exercising the required professional caution is in their own interest. 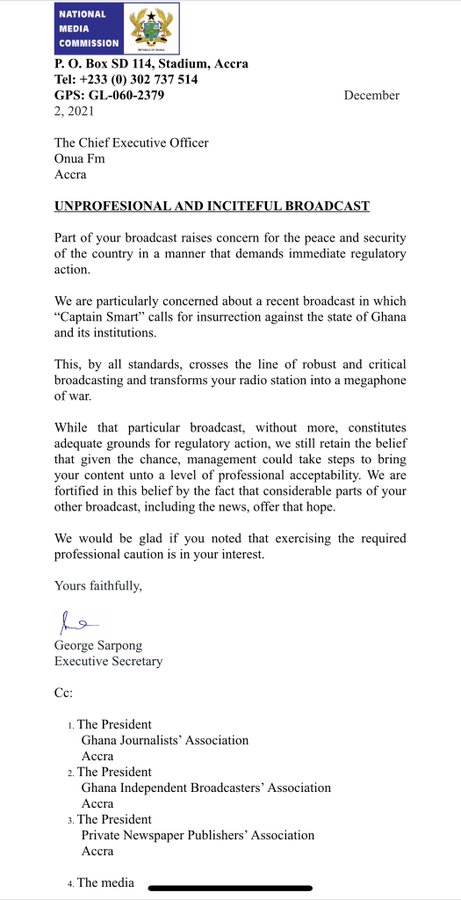 Singer and Kumawood actress, Yaa Jackson, has been spotted again with another different young man in a hotel room.

It could be recalled that, the young crooner was in the news after she was fingered in a hotel scandal and she comes in again with another guy in a new video.

The actress was spotted with the young man at a hotel room where they were really having fun and enjoying themselves to the max.

Lynx Entertainment act Kuami Eugene, has reacted to news about people asking him to get married.

According to him he has everything planned out and doesn’t want to make any mistake to give birth and marry, despite the number of girls in her DM.

The actress and presenter who is not fun of that surprised a few this time around as she looked sweet and shinning in the face photos.

Check out the photos below;