Ghanaians have a lot to be thankful for. Of course, the country is not on the pedestal it should be due to poor leadership, but, in the words of Bukom Banku, “everything you want, if you get, there are no beggars on the road.”

Ghana is rich in natural resources such as gold, bauxite, manganese, oil, cocoa, shea butter, cotton, salt, and so on. The fact that Ghana is regarded as one of the most peaceful countries in the world is paramount.

GhanaCNN.com takes as look today as we discuss the Ghanaian celebrity that inspires us as a people.

Ghana has fared well in the world of entertainment. Some of its talents are world-renowned, and we look at a few of them here who make us proud to be Ghanaians.

He’s affectionately known as the ‘rap dacta’. Now, hear this: On April 20, at the +233 Jazz Bar and Grill, Okyeame Kwame launched a 10-track album titled ‘Made in Ghana’ to restore patriotism and a sense of national pride which we believed that majority of Ghanaians were lacking.

In 2018, he was appointed as a brand ambassador by the Ministry of Trade and Industry for its Made-in-Ghana campaign.

Okyeame Kwame’s effort in promoting Ghana’s culture globally deserves notable mention and of course, as a result, he’s one who’ll make you proud to be a Ghanaian.

Thomas Teye Partey is a Ghanaian professional footballer who plays as a midfielder for Arsenal in the Premier League and for the Ghana national team.

Thomas Partey, as he is affectionately known, was a member of the Atletico Madrid team that won the 2020 Spanish La Liga season, having previously played for English club Arsenal for half of that season.

He’s best known for his time at English giants, Chelsea FC and is largely regarded as Ghana’s best player for the past decade. Chelsea FC coughed up £24.4million to purchase him from Olympique Lyon in August 2005. At the time, that was the highest amount of money splashed on an African footballer.

In the 2006-07season, Essien was voted by Chelsea fans as the team’s player of the year. His beautifully placed strike against Arsenal was also voted as the Chelsea goal of the season in 2006-07. Essien caused a lot of Ghanaians to support Chelsea FC and they are still supporting.

Related Topics:Ghanaian footballerList Of Ghanaian Celebrities Who Make Us Proud As GhanaiansParteyThomas Teye Partey
Up Next

Today In History: How Former Head Of State, General I.K Acheampong Was Executed By Firing Squad On This Day In 1979

Sekou Nkrumah who happens to be the son of Ghana’s late nationalist and first president, Osagyefo Dr Kwame Nkrumah has revealed that his dad was 26 years older than his mother.

According to Sekou Nkrumah, his mother, Fathia Nkrumah had dreams of having a romantic marriage with the man of her dreams (Osagyefo Dr Kwame Nkrumah).

He shared that it was quite unfortunate that this long-standing dream of his mom fell to nothing but loneliness and unfulfilled drama.

“My mother Fathia Nkrumah had to learn the “hard way” especially when on their wedding night, Osagyefo was caught up with work and returned home very late to spend time with his wife.” – he said.

Sekuo while spilling the bean on the reasons for a quarrel between his parents that was later misinterated as his father been a womanizer raised this as he added:

“Although it was an arranged marriage, the young Fathia was really in love with Nkrumah, she idolized the iconic and charismatic African leader!, There was also a big difference in age between them! Nkrumah’s official birth is 1909, while that of Fathia is 1935!”

Dr Sekou Nkrumah, one of the sons of Osagyefo Dr Kwame Nkrumah has admitted that all was not well with the marriage of his parents especially after Ghana gained her independence.

Though too young to understand what was going on, Dr Nkrumah says it wasn’t because his late father was a womanizer but rather, he had little time for his wife.

He also attributed the difficulty in their marriage to the age difference, thus, Osagyefo was 26 years older than his wife, Fathia.

Emma Florence Yaa Adinyira Amedahe, the lady-in-waiting to the then First Lady Fathia Nkrumah, in a recent interview with Accra-based Joy FM stated that she had a friendly relationship with the first family at the Flagstaff House.

The former staff of the first family said, the then First Lady related with her like her own sibling and had deeper conversations together.

“Madam [Fathia Nkrumah] took me to the children’s room the first day I reported for work, she hadn’t assigned me to anything yet. I bought storybooks for their two children, Gamal and Samia. By then, they had a nurse who was catering for the children. After one month, Fathia asked me to be in charge of her room, that’s cleaning. She started drawing me closer to herself. When her hairstylist came, she would call me to help him. Her hairstylist was a man by the name of Joseph.

One day, Joseph finished styling her hair, but madam didn’t like it, she undid everything and later asked me to do it. She appreciated what I did and asked Joseph not to do her hair again because she liked it when I did it for her. She later asked Joseph to train me, he trained me for three months.”

“We used to talk, she even told me how her husband was treating her. I went to Egypt with her so I know a lot of her family members. Fathia saw me as a sister, and I was also like her sister. She once told me Osagyefo didn’t like her and that he was a womanizer,” she said.

Reacting to this, Dr Sekou Nkrumah wrote on his Facebook timeline:

“Fathia had a difficult marriage with Nkrumah, not because of him being a womanizer rather because he had very little time for her! 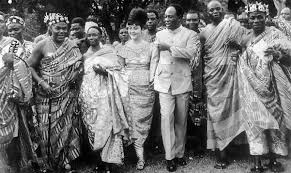 There was also a big difference in age between them! Nkrumah’s official birth is 1909, while that of Fathia is 1935!”

He added that, even though the marriage between Nkrumah and Fathia was an arranged one, Fathia was really in love with her Ghanaian iconic and pan-African leader.

Dr Nkrumah noted, his mother had dreams of having a romantic marriage with the man of her dreams, she had to learn the “hard way” especially when on their wedding night, Osagyefo was caught up with work and returned home very late to spend time with his wife.

“Although it was an arranged marriage, the young Fathia was really in love with Nkrumah, she idolized the iconic and charismatic African leader!

But she quickly learned the hard way, when on their wedding night Osagyefo was caught up with work and returned home very late!

The young Fathia had dreams of a loving and romantic marriage but had to learn fast to accommodate and adapt to Nkrumah’s busy lifestyle. Simply put, politics consumed all his time and mind!” Dr Sekou Nkrumah stressed.